This is my collection of lasers; while I’m no longer actively building them anymore, I still enjoy them. 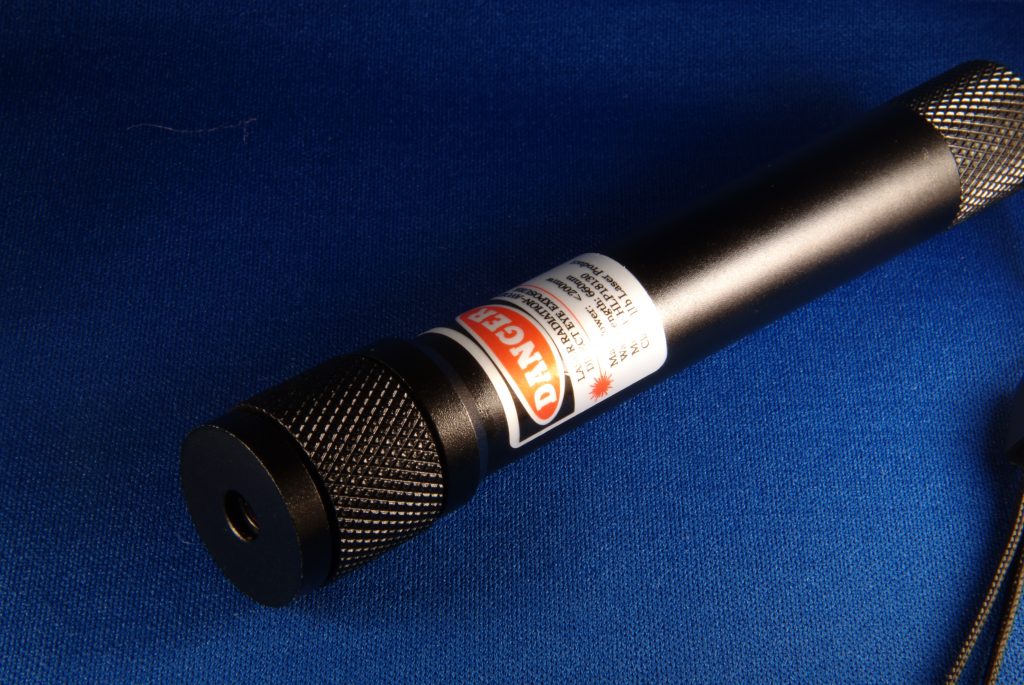 This is a solid, well made budget laser with plenty of power. It is powered by two (included) 3.0v CR2 rechargeable batteries, in a positive first configuration. 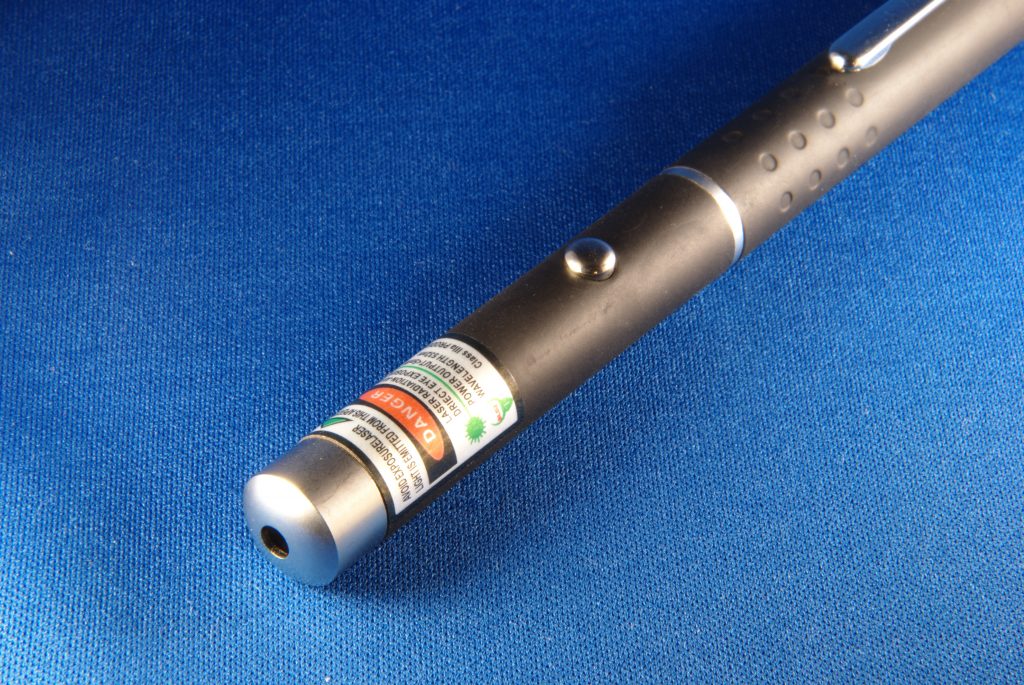 This a a fairly standard pen-type laser pointer rated at 5mW (Class IIIA) but is actually putting out well over that, mine are between 30mW and 40mW (Class IIIB). It is powered by two 1.5v AAA batteries in a negative first configuration. 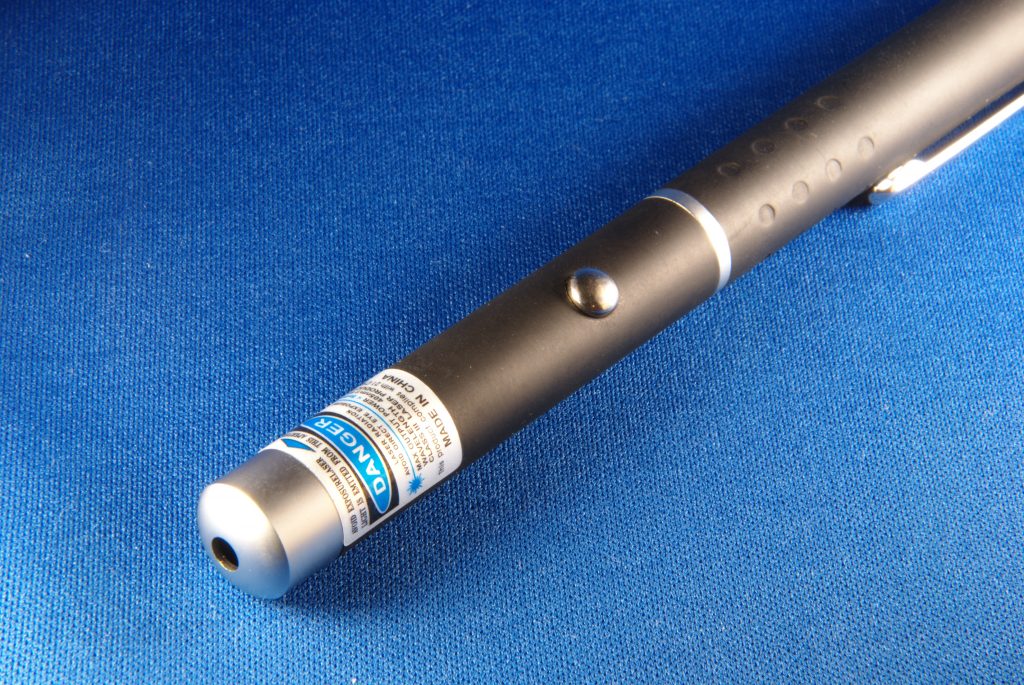 I paid around $10 for this pen-type laser (in an identical host to the 532’s above), which has a steady output between 45mW and 46mW. Like the 532’s above, it is power by two 1.5v AAA batteries, in a negative first configuration. While the label on this unit as being <5mW, it’s well past the 5mW limit for Class IIIA devices, putting it into the more regulated Class IIIB range, though not surprisingly it is missing the standard safety features for such a device. 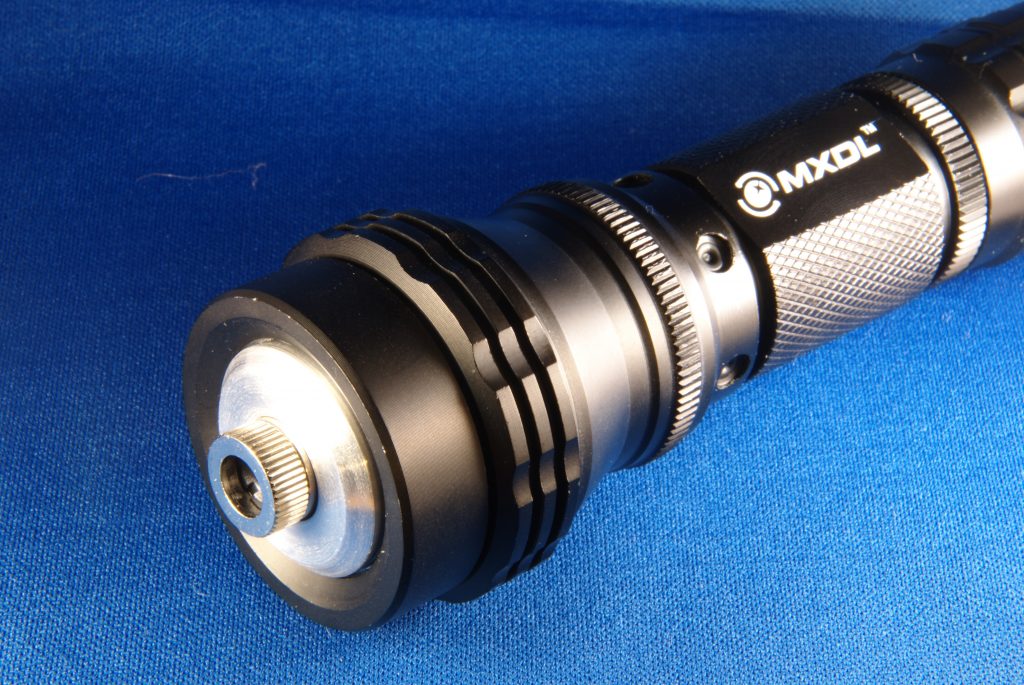 This is a custom laser based on the popular PHR-803T diode (HD-DVD for Xbox 360), in a DealExtreme 3405 host with a custom heatsink. The diode itself is mounted in a 12x30mm housing made by AixiZ, and is driven by a rkcstr driver at ~102mA. So far, for a improvised host (i.e. a host not meant to be a laser), the 3405 is great – it feels good in the hand, very sturdy, and plenty of room to work. It also allows for a rather beefy heat-sink which makes heat a minimal issue. Stock, the 3405 is a 5W LED flashlight powered by 3 1.5V AAA batteries; as a laser it’s power by three 3.6v 10440 batteries.

This should be putting out closer to 100mW than the current 83mW, the real limiting factor is the acrylic lens mounted in the AixiZ module. I will soon be ordering a glass lens coated for this range, as well as adjusting the driver to 110mA.

This build worked out so well, I have another build underway for Matt Little with a higher power diode. 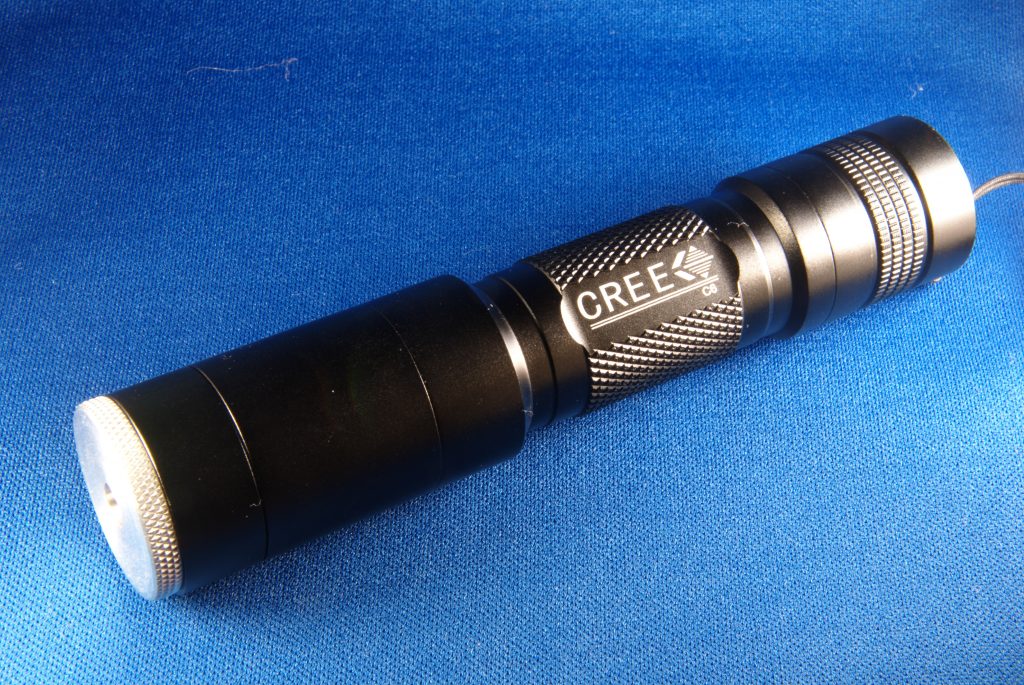 This is a custom laser in the DealExtreme Aurora C6 host, power by a single 3.7v AW 18650. It has a 445nm diode from a Casio XJ-A140 projector, driven by a Mirco BoostDrive at 1120mA. It uses the AixiZ 445nm glass lens, mounted in a custom focus housing that is the full diameter of the housing to keep my fingers away from the beam. It uses a custom heatsink, made from copper to maximize heat dissipation due to the high power involved.

The build went extremely smooth, I couldn’t be happier with this one. (Pictures coming soon, a video till something better is ready) 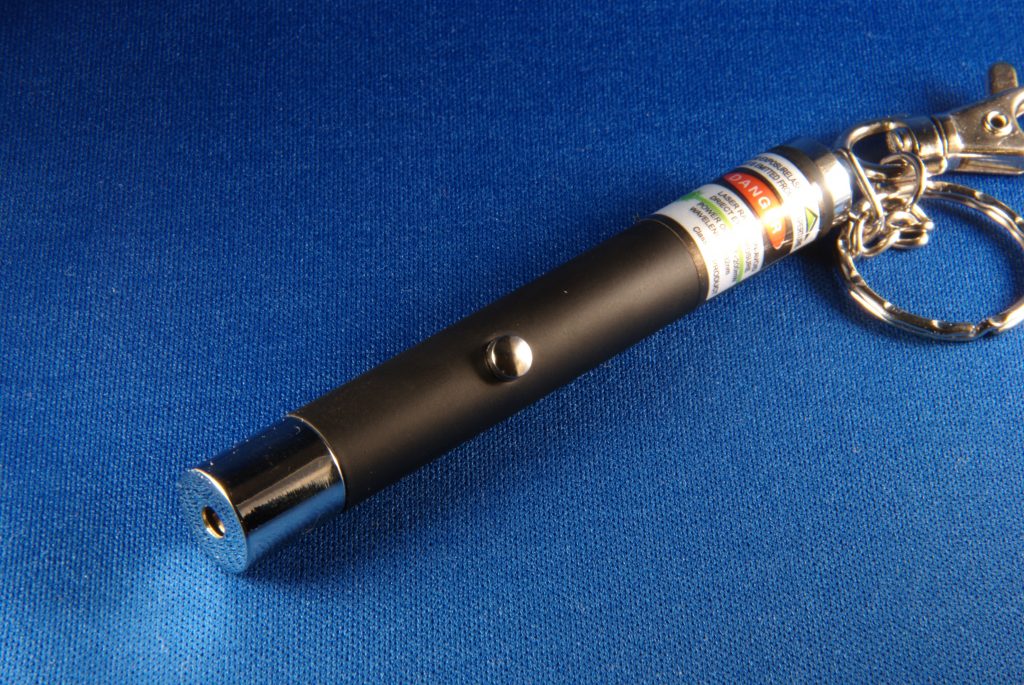 This is a small keychain style laser powered by a single 3.6v 10440 battery in a negative first configuration. These lasers always underspec, which isn’t surprising for the $30 price tag; the actual output has been reported as low as 80mW with mine being the highest I’ve seen at 142mW. These lasers have a short duty cycle due to excessive heat generation in combination with the inability of the small host to properly dissipate it; within 30 seconds they can hit 120F.

My original plan was to harvest the module for us in another build, though with the heat issues I’ve scrapped that idea. 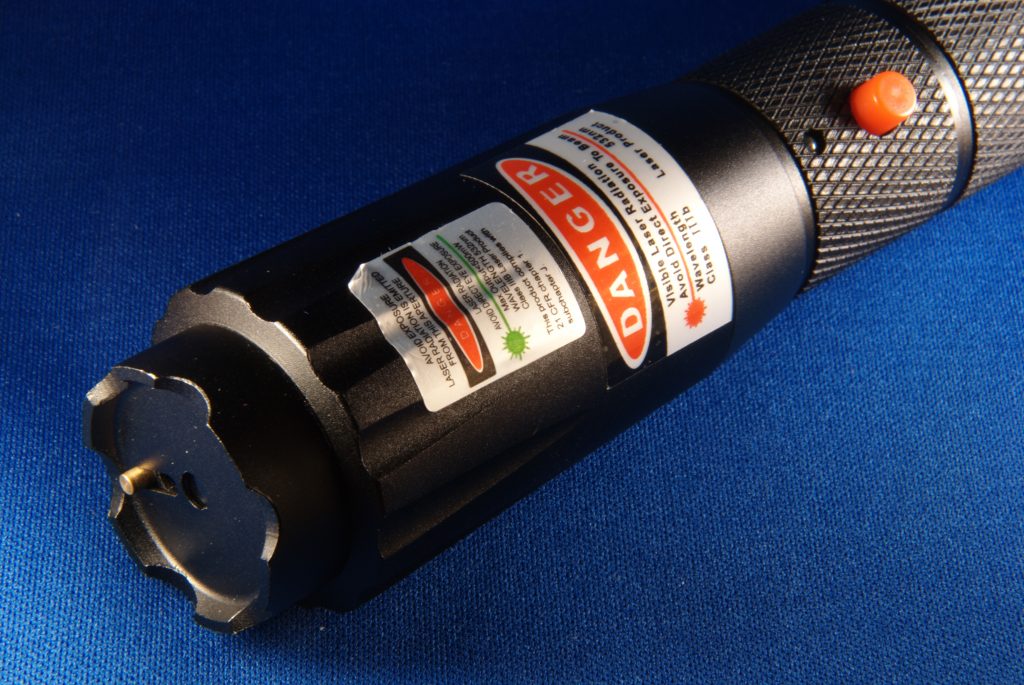 This is probably my favorite laser so far; it is amazingly bright and incredibly impressive at night. The host is somewhat heavy giving it real presence when held, it is constructed of what seems to be high-grade aluminum and seems to dissipate heat quite well. It features a key lock on the tail cap, a operation warning light when the key is in the ‘on’ position and a mechanical shutter; these features cover the majority of the required FDA safety features.

It takes some time to get this laser up to its preferred operating temperature, but once it’s there it will peak at 500mW and stabilize at 430mW.

This laser was sold originally by Rayfoss though this specific model has been discontinued and is no longer available for purchase. 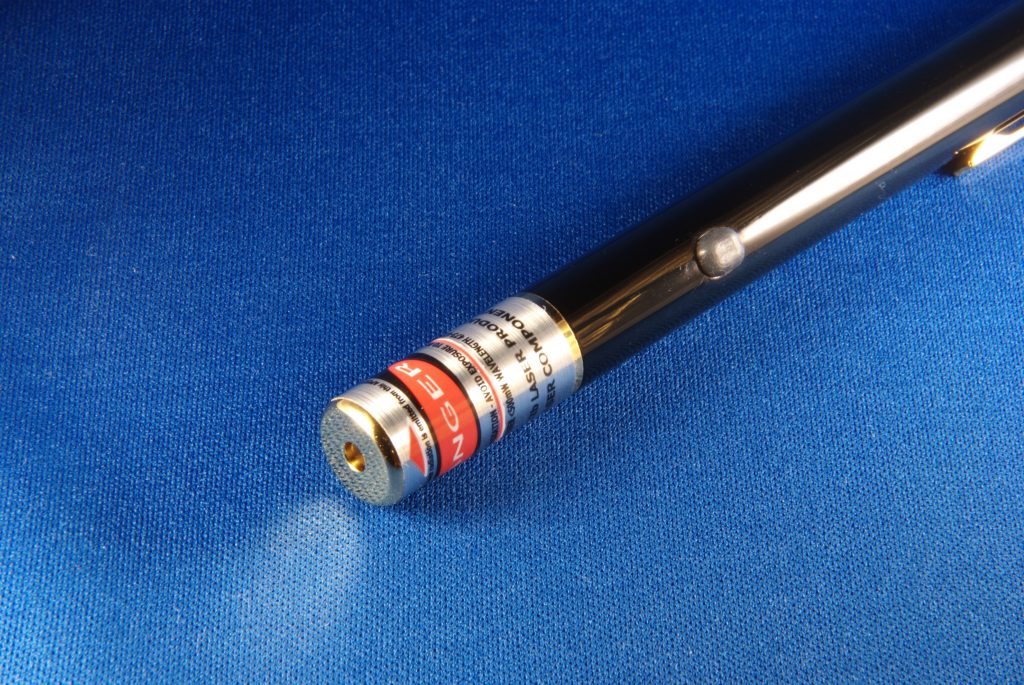 Being a CNI laser in the ever popular GLP host, this laser is stunning. It has a great presence in the hand being just a little on the heavy side for its size. Peaking at 162mW of 532nm green – it is quite impressive. A great laser, highly recommended. 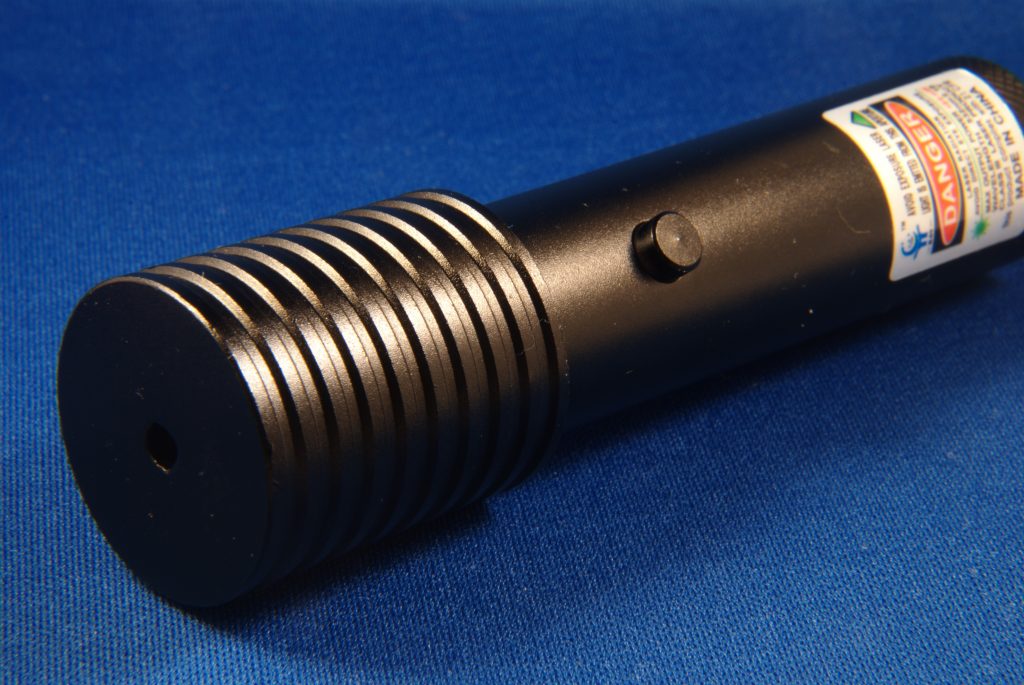 This is a smaller torch-style laser that seems to be loosely based on the popular Optotronics RPL (though much smaller). It measures 104mm x 22mm (28mm at the heat-sink), and thanks to the large heat-sink it is a little on the heavy side. It is in the same host as the Rayfoss XDZ, though unlike the XDZ it is powered a single 3.0v CR123A in a case positive configuration.

Update: While this was a cool little laser, I had another use for its module. This was scrapped to complete the NES Zapper laser.

Is this a small red (632.8nm) HeNe laser measuring less than six inches in length and feed by a small power brick that boosts 12v DC to 1,250v DC. While I have no information as to what this little laser was originally intended for, at least the spec sheet is still available (warning: PDF).

This is an original orange Nintendo Zapper that has been modified to hold a 50mW green laser. The Zapper is a great host for low power (thus low heat) lasers, and requires only a few small modifications to do the job. It houses the module from a wlaser 50mW green torch (mini RPL style) and is powered by two lithium AAA batteries.

Having a good, reliable power meter is a must when working with lasers, just that simple. The Laserbee has so far proved to be a great asset, and far less expensive than many of the other meters out there.

Having safety goggles isn’t an option, it’s an absolute must. The O-like Blue/Green goggles are decent, though they allow far more light in than I would like. While they are claimed to be rated at OD5, one tester shows them as low as OD2 – these certainly don’t live up to the claim of being OD5. While they work ‘well enough’ for low power lasers, they shouldn’t be trusted for higher powered units. Overall, you get what you pay for.

Protip: These are highly reflective, a beam bounces off the lens almost like a mirror. If you are working with a laser and have a spare pair lying around, remember this fact.

This is a great soldering station; the temperature is well regulated and easily controlled, and the grip is cool and comfortable. For a lower cost unit, I highly recommend it.

I am a Principal Security Engineer at 1Password, researcher and software developer with more than 20 years of experience.

I primarily focus on application security, secure communications, and cryptography, though often research new areas if I get too bored. I write about my research and security in general, development and software design, and whatever hobby has my attention at the moment.