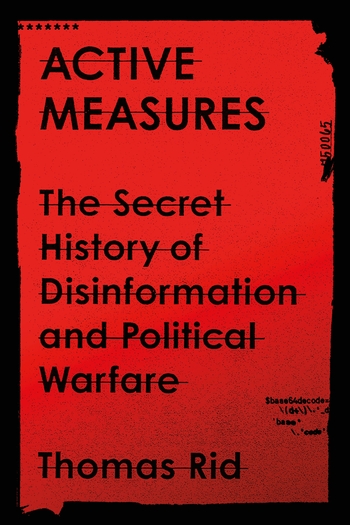 Thomas Rid has delivered with Active Measures, it’s clear, surprisingly entertaining, and extremely well sourced. This is a must-read if you want to understand how disinformation operations work, and more importantly, how we managed to find ourselves in a world where it’s hard to trust anything.

The book starts with the birth of modern disinformation in the 1920s, following the advances, successes and failures, though to the fiasco that was the 2016 elections. From the successes of the 1950s and 1960s, it’s clear that the stage is set for the activities of the 2010s – the methods work, the impact is real (if hard to quantify), and the techniques well understood and easy to scale.

Much ink has been spilled on the topic of the 2016 election, and the manipulation of public opinion that was being performed so aggressively – what few have captured so clearly, is the backstory that led to it. It is this backstory that is so critical to understand, to put these actions in context.

“For the man on the street it is getting harder to assess and to judge the written word. He is ever more helpless in the face of the monsters that are opinion factories. This is where we come in as an intelligence agency.” – Rolf Wagenbreth, East German Stasi. 1986

To understand the disinformation campaigns that are in play today (and in recent history), it’s important to look at how the art of disinformation evolved. By looking at the early efforts to release forged and altered information in the pre-WW II era, you get an insight into the goals and motivations – how propagandists leveraged the public’s inclination to believe the worst in people to influence both the public and decision makers.

As we move to the early 1950s, the methods become better – rooting lies in truth to make the lies more believable, leveraging the common reading materials of the day to sow dissent and discord. But it is in the 1960s that the modern model really comes into its own: leveraging mostly or even entirely true information to create controversy, which will either play out to its own destructive ends, or be built on with further and more destructive actions. By the end of the 1960s, pretty much all of the major American newspapers has been a victim of a disinformation campaign.

Propagating the truth of America’s racist past, stolen military documents being fed to journalists, taking advantage of real events, such as the suicide of a high-ranking military official to change the narrative of events. These all served to harm the interests of the United States, and all with minimal risk to those behind the actions.

It is these successes, these lessons that were learned early in the evolution in disinformation that provided the blueprint for modern campaigns.

This is a solid book, with extensive documented sourcing, and provides an excellent insight into where we are today – and how we found ourselves in this position.

I am a Principal Security Engineer at 1Password, researcher and software developer with more than 15 years of experience. I primarily focus on application security, secure communications, and cryptography, though often research new areas if I get too bored. I write about my research and security in general, development and software design, and whatever hobby has my attention at the moment.